Many of you may not know, but I married a very, very romantic man. There are lots of girls who dream of romance… I was not one of them. In high school I begged my prom dates to take me to McDonalds, or to the food court! I just wanted to eat.

So no one was more surprised than I when I met and very soon fell in love with a romantic man. And what was his preferred method of “winning” my heart? Letters… and lots of them.

These were all written before we even got married. And he took this letter writing to new levels. After only 3 dates I was surprised by a 4 series poem (given to me by different people throughout the day), written by Brandon. I was so impressed by the poetry, i was certain Brandon didn’t write it, so I showed it to one of my English professors (thanks, Dr. Wink) and we struggled together to find it… But it was not to be found because it was a Brandon O’Brien original.

After we had been dating for only a few months, Brandon went to Ireland with a friend. When he returned I received this. He wrote me little letters throughout his two weeks away… 13 total.

There was also a dried flower in the mix!

Brandon was very creative in his letter writing. Throughout our dating, I received these…. 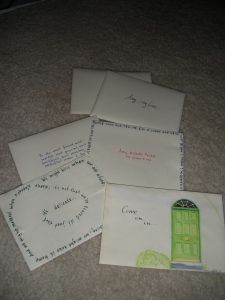 Yes, he did paint the one in the front...

And ultimately on the night he proposed, I received this… 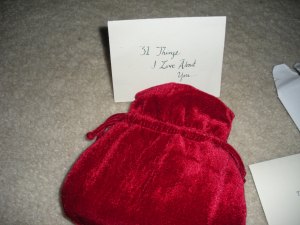 The card says "31 Things I Love About You"

Being the “ruiner-of-moments” (that was was one of the 31 things) that I am, I asked him why there was only 31… he patiently explained it was for each day of the month, but of course he could have written more. 🙂

I am amazed by the man I get to live life with, and it all started with letters… lots and lots of letters. 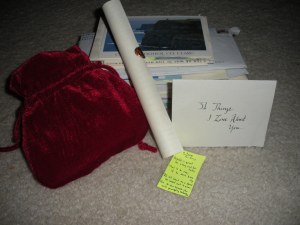 What am I writing?

Learn more about the O’Briens